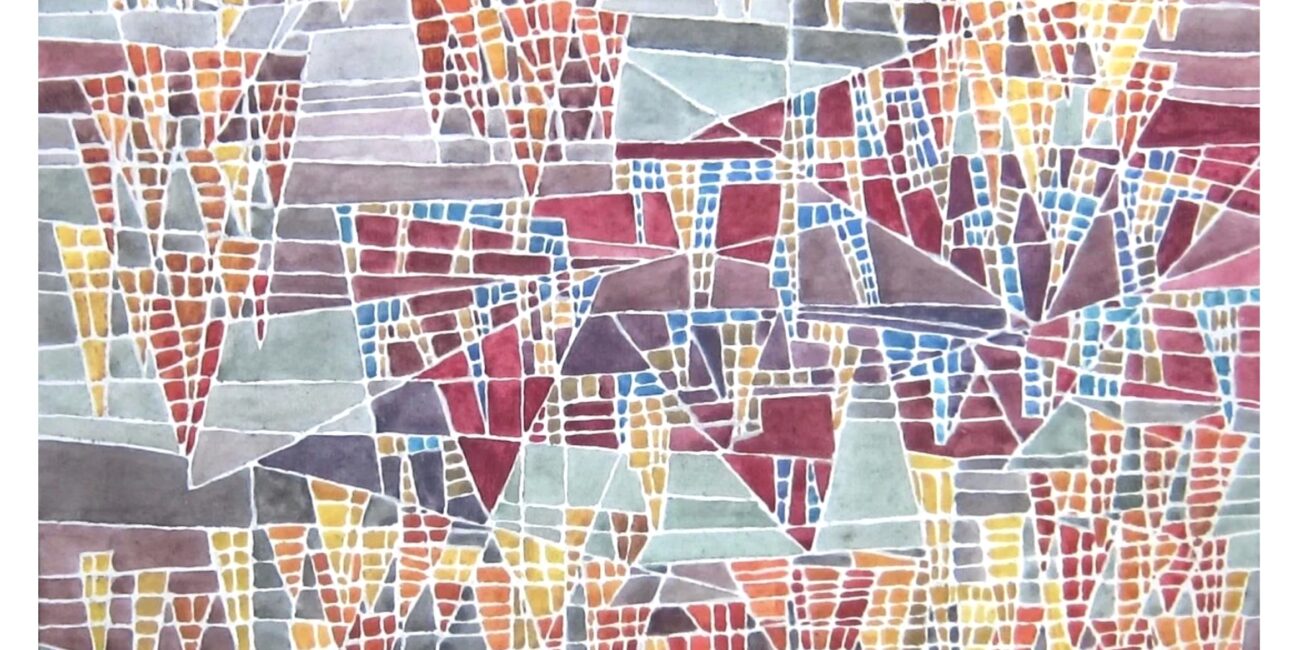 Hildegarde Haas was born with a unique and astounding ability;  The ability to see sounds.

Gifted with a condition known as synesthesia, when Haas heard certain sounds she would see colors and shapes.

As a painter Haas took full advantage of this gift, employing it to create some of her most novel abstract paintings.

The word Synesthesia finds its roots in the Greek language, roughly translating to ‘union of the senses’.

Ironically some scholars believe that the Ancient Greeks and Romans en masse had synesthesia.  One often quoted clue is found in Homer’s ‘Iliad’ and ‘Odyssey’ Homer describes the ‘wine dark sea’ describing the Aegean Sea of which there is none more blue.   This descriptor is cited by scholars who argue that ancient cultures did not experience colors in the same manner as we do today, for they all had synesthesia.

Many famous artists, poets, musicians and authors throughout history have had synesthesia including painters Wassily Kandinsky and Vincent Van Gough, musicians Duke Ellington and Billy Joel, and writer and poet Vladimir Nabokov.

Haas, like Kandinsky, channeled this ability while creating some of her works, including her classical music series.  While in her studio Haas imbibing in the sounds of Bach, Handel, Beethoven she put to paper and canvas what she experienced.

Each of the paintings Haas created in her classic music series are titled for the exact musical work she was enjoying while creating the corresponding painting.

While appreciating these vibrant and energetic paintings one has to wonder:  Is there someone with a similar gift to that of Haas, who can hear Bach’s English Suite No.2 in A Minor – V Bourree  while viewing Haas’s work by the same title.

Bateba: Connection to the Spirit World

Bateba, (Lobi for – carved wooden figure), are anthropomorphic effigies created and used by the Lobi peoples of Western Africa as intermediaries to the spirits who watch over them.

The Lobi are a small part, (less than 200,000 en masse), of an ethnic group of people originating from today’s Ghana that now occupy parts of Burkina Faso and the Ivory Coast.

The name Lobi translates to ‘children of the forest’.   These children of the forest fled from their homelands beginning in the 1770s to avoid the slave raids happening there.  In their escape to safety, the Lobi crossed the Mounhoun River from the east to settle in the lands to the west.  Now, according to Lobi legend, when a Lobi person dies their spirit must return across the Mounhoun river to rejoin their honorable ancestors in the ancient world.

The Lobi peoples are a highly spiritual culture, and, unlike most other cultures of the world, the Lobi are devoid of any centralized political authority in the form of a chief or council of elders to oversee the community.  Instead, the Lobi people adhere to a structure set forth by the spirit world.

In Lobi culture Thangba Yu is the creator of all living things.  The Lobi people used to exist in an idyllic world, similar to the Garden of Eden until social rules were broken and Thangba Yu abandoned the Lobi.  Thangba Yu now watches over the Lobi from afar and communicates his will through invisible spirits called thila, (thil singular).  These thila possess supernatural abilities which they can use for both malevolent or benevolent means and dictate social order through diviners.   Each Lobi village will have its own thil to watch over them, and each household within a village has its own separate thil to watch over their household.

The Lobi are also animists believing that all things including animals, plants, stones, rivers, weather systems, spoken words, and even human handiwork, such as bateba, are animated and alive.

Unlike most other African cultures, the Lobi do not have designated carvers within their society, so a bateba can be created by anyone, given they are instructed to do so by the spirits.

With so many different carvers of bateba the styles and character can range widely, but a bateba will always depict a human form, and almost always they will have certain characteristics that designate their purpose.  For example, a bateba with arms to the side and head facing forward is usually a ‘normal bateba’ with no specific intent but rather has a generalized purpose of good fortune for the owner, whereas a joined male and female form bateba is made specifically to be used by a male suitor to help him find a suitable bride.  A bateba with two heads, or two faces, is thought to have the ability to see in all directions and able to protect the owner from potential harm from witchcraft.  A sitting bateba with legs stretched out in front of them is meant to help protect the young and the elderly from paralysis.  A bateba with hands to the face is said to be a sad bateba and helps the owner in times of mourning.   A bateba with one or both arms outstretched is considered a dangerous bateba and is placed near the entrance of a home to help keep disease and harmful witchcraft from entering the home.

Because of their compelling history and unique features, bateba are becoming highly collectible and are finding their way into private and public collections around the world.

It has been told that Christian missionaries once converted an elderly Lobi man to Christianity, and in his conversion of faith the elderly man gave up on his bateba, throwing them into a nearby body of water.   As the elderly man turned away from the water, turning his back on the spirits, the bateba leapt out of the water to reclaim the man.  It is for this reason that when a Lobi person converts to Christianity or Islam, they will most often burn their bateba, or sell them at a marketplace.

Here are Bateba we currently have available for sale: